Researchers at the King’s College London have found that the onset of the neurodegenerative disease amyotrophic lateral sclerosis (ALS, or motor neuron disease) could be a multistep process similar to some cancers. Researchers will now need to identify the six different steps that lead to ALS. 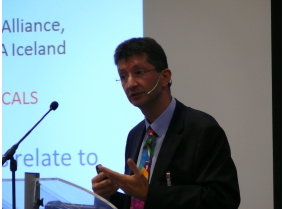 The disease ALS leads to relentless, progressive paralysis of voluntary muscles over months and, after onset, an affected person has an average life expectancy of two to five years. It was previously thought that onset was a simple process of genetic susceptibility in the sufferer plus an environmental trigger, but new research, published in The Lancet Neurology and funded through an EU Joint Programme Neurodegenerative Disease (JPND) research project, suggests that the disease could be the result of a more complex six-step process that would make it similar to some cancers. Similarities between ALS and cancer have been noted previously and include the rapid progress of the disease after onset, the possibility the disease may not express despite genetic predisposition and that the disease only expresses in adulthood. This research adds to growing evidence for an association between the formation of neurodegenerative diseases and cancer.

The researchers led by Professor Ammar Al-Chalabi from IoPPN and Professor Neil Pearce from the London School of Hygiene and Tropical Medicine employed a mathematical model that had been used previously in cancer studies. The model was applied to data from a large Europe-wide collaboration on motor neuron disease, specifically using findings from 6274 cases of ALS from England, Ireland, Scotland, Italy and the Netherlands over the last 25 years. Results from each country showed onset of the disease is consistent with a six-step process.

Professor Al-Chalabi, Professor of Neurology and Complex Disease Genetics at the IoPPN, King’s College London, said: “We found that ALS is caused by a sequence of six different risk factors over a lifetime.  Once someone is exposed to the sixth and last risk factor, the disease is triggered.

“This is a completely new way to think about neurodegenerative diseases like ALS, and means the process is more like the process that causes cancer. It explains why these diseases are more likely to affect us the older we get, and suggests we might be able to prevent them if we can stop one of the steps.”

Getting a better understanding of how neurodegenerative diseases like ALS originate will help with devising appropriate treatments that can be administered at the right time, and recognising the association of the disease with the onset of cancer may also hint at how both diseases develop and so enable sharing of therapeutic approaches.

“Researchers will now need to identify the six different steps that lead to ALS. At least one of them is likely to be the genetic makeup someone is born with, but it looks like that is not enough on its own. The environment we live in and the lifestyle we lead will also need close study,” Professor Al-Chalabi said.