Johnathan Cooper-Knock is the winner of the ENCALS Young Investigator Award 2017. Chair of the award committee Prof. Ammar Al-Chalabi congratulated 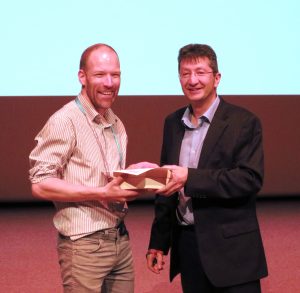 Johnathan with his important work on genetic variants of MND/ ALS at the last day of the ENCALS meeting in Ljubljana.

Johnathan Cooper-Knock works as a clinical research fellow at SITRAN, the Sheffield Institute for Translational Neuroscience in Sheffield, UK. His interest is in studying the changes to gene expression as a way of better understanding MND/ ALS and identifying therapeutic targets. In particular his work has focused on the most common genetic variant associated with abnormal expansion of the gene C9ORF72. After receiving the award Johnathan presented an overview 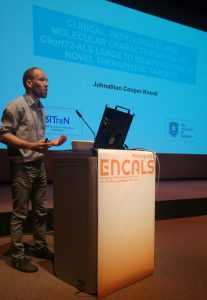 of his work titled ‘Clinical, pathological and molecular characterisation of C9orf72-ALS leads to identification of novel therapeutic targets’.

The ENCALS young investigator award was designed to recognize the brightest and best young scientists in ALS, and is given for outstanding research. It is judged by the ENCALS award committee, an international panel of experts. Criteria include any or all of novelty, challenge to existing ideas about ALS, results with patient benefit, and impact on our understanding of ALS.