In order to address how the specialised nerve cells that control voluntary movements die, the Sheffield MND research team has looked at changes that specifically occur in motor neurons in the most common genetic cause of MND linked to mutations in the C9ORF72 gene. They have found evidence that repetitive sequences found within this gene in people with MND can be toxic and lead to a widespread malfunction of gene expression.

The ribonucleic acid (RNA) copies produced from the C9ORF72 gene in MND patients are faulty, and instead of being used to produce the C9orf72 protein they cause mayhem in the cell. They accumulate in speckles termed RNA foci and by binding and hording nuclear processing and export factors, they affect the correct expression of other genes. The researchers conclude that this may not immediately result in disease; however in time compensatory mechanisms might be overwhelmed in vulnerable cells. 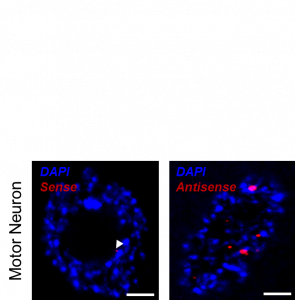 Studying tissue from C9ORF72-MND patients the researchers also found that motor neurons, the prime targets in MND, accumulate a distinct type of RNA produced from the C9ORF72 gene. The faulty gene sequence is copied in both directions, termed ‘sense’ in the direction of the gene and ‘antisense’ referring to the reverse copy.

The study now published in Acta Neuropathologica concludes that antisense foci are present at a significantly higher frequency in motor neurons than in other nerve cells studied. Moreover, the presence of antisense foci, but not sense foci, correlated significantly with nuclear loss of the protein TDP-43 which is the hallmark of MND neurodegeneration.

The scientists also observed antisense foci in the cytoplasm of motor neurons, which is consistent with defective export of the faulty RNA copies from the nucleus, and may be a key step in the production of toxic protein derived from the antisense RNA.

“This intriguing observation suggests that antisense RNA foci may occupy a key position in the cascade of disease pathogenesis in C9ORF72 MND,” added Dr Cooper-Knock. “We suggest that the key to toxicity might be a propensity to produce antisense foci mediated by cell-specific transcriptional regulation events in motor neurons.”

Professor Dame Pamela Shaw, Director of SITraN and lead of the MND research team, said: “This has implications for translational approaches to C9ORF72 disease and furthermore, interacting RNA-processing factors and transcriptional activators responsible for antisense versus sense transcription might represent novel therapeutic targets.”

More on this new C9ORF72 research can be found on the Alzheimer’s Forum.