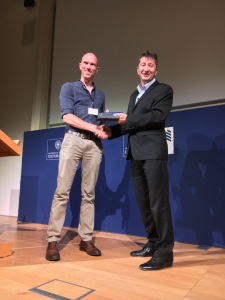 Russell McLaughlin is the winner of the ENCALS Young Investigator Award 2018. Chair of the award committee Prof. Ammar Al-Chalabi congratulated Russell with his important work on the genomics of ALS at the last day of the ENCALS meeting in Oxford.

Dr. Russell McLaughlin is Ussher Assistant Professor in Genome Analysis at Trinity College in Dublin. As the winner of the 2018 ENCALS Young Investigator award he presented ‘Why GWAS is (still) useful in ALS’

The ENCALS young investigator award was designed to recognize the brightest and best young scientists in ALS, and is given for outstanding research. It is judged by the ENCALS award committee, an international panel of experts. Criteria include any or all of novelty, challenge to existing ideas about ALS, results with patient benefit, and impact on our understanding of ALS.