Tatyana presenting her work during the virtual ENCALS satellite meeting. 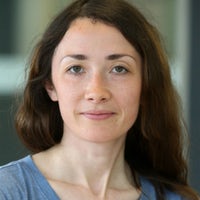 Tatyana is a researcher with a growing international reputation in the field of RNA metabolism in ALS and related diseases. During her PhD training, with the help of an EMBO fellowship, she contributed to the generation and characterisation of a mouse model of ALS-FUS with robust protein aggregation and a typical ALS phenotype (Shelkovnikova et al., 2013). These initial studies introduced her to the field of RNP granule regulation in ALS. She continued to develop this stream of research during her postdoctoral training at Cardiff University (Prof Buchman’s lab), where she spearheaded a number of interconnected projects focussing on (dys)metabolism of two types of RNP granules, paraspeckles and stress granules, in ALS. Since September 2018, she is leading her own research group, supported by the MND Association senior fellowship, at the recently established Medicines Discovery Institute.

Contributions to the ALS field:

During postdoctoral training, she started focussing on a major ALS-linked protein FUS, a component of both paraspeckles and stress granules. In 2013, she spotted a connection between nuclear bodies paraspeckles assembled on the lncRNA NEAT1 and ALS-FUS pathogenesis (Shelkovnikova et al., 2014a), and since then, she has been actively developing this research niche. In particular, supported by an MRF fellowship, she found that FUS and TDP-43 loss and gain of function can contribute to ALS pathogenesis by affecting NEAT1/paraspeckles (Shelkovnikova et al., 2018; An et al., 2019). These studies pointed to a possible protective role for paraspeckles in motor neurons in ALS and suggested that their formation may be the much-sought ‘universal’ molecular signature shared by aetiologically different ALS cases and therefore an attractive therapeutic target. Follow-on studies of these findings are currently supported by a 4-year senior fellowship from the MND Association. With additional funding from the Wellcome Trust and Academy of Medical Sciences, her group is developing in vitro and cellular assays to identify small molecules for modulation of NEAT1 levels as potential ALS therapeutics.

In parallel, Tatyana is leading a basic research program aimed at better understanding of the role of nuclear and cytoplasmic RNP granules in ALS, using stress granules and paraspeckles as model RNP granules. Back in 2014, their study was the first to report the differences between mutant FUS-containing stress granules and FUS aggregates spontaneously formed in the cytoplasm upon mutant FUS accumulation (Shelkovnikova et al., 2014b). Recently, they applied a biochemical purification protocol for parallel isolation of mutant FUS assemblies and physiological stress granules and characterised cellular pathways disrupted by the presence of mutant FUS assemblies (An et al., in preparation). In a search of possible environmental factors, or “secondary hits”, in ALS pathogenesis, they recently found that antiviral immune response can contribute to ALS-FUS development by enhancing FUS accumulation and incorporation into cytoplasmic aggregates and stress granules (Shelkovnikova et al., 2019). She also contributed to the understanding of mechanisms controlling chronic and acute stress granule formation in neurons in vitro and in vivo (Shelkovnikova et al., 2017). Beyond FUS and TDP-43 focussed studies, she is also interested in proteins linked to rare ALS subtypes, such as CREST. Together with her colleagues in Tokyo and Nevada, they identified several determinants of mutant CREST toxicity shared with other ALS proteins, such as its ability to incorporate into RNP granules and modify TDP-43 toxicity, – supporting the existence of common mechanisms in genetically diverse ALS cases (Kukharsky et al., 2015; Park et al., 2018).
Most recently, her group discovered the existence of a crosstalk between spatially separated RNP granules using a novel approach to purification of paraspeckle-like structures (An, Tan, Shelkovnikova, 2019).

In conclusion, Tatyana continues to be fascinated by the complexity of ALS pathomechanisms. Together with her research group, she hopes to address some of the major challenges in the field in the upcoming years by conducting both basic and translational research of RNA-related dysfunction in ALS.