Alfredo presenting his work during the last day of the virtual ENCALS Meeting, Friday May 14th. 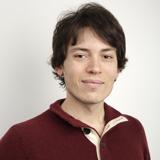 Alfredo Iacoangeli is the winner of the ENCALS Young Investigator Award 2021.

Prof. Ammar Al-Chalabi, chair of the ENCALS Award Committee, congratulated Alfredo during the virtual ENCALS Meeting on Friday, May 14th 2021.

Dr Iacoangeli’s background includes BSc and MSc degrees in biophysics at “Sapienza” University of Rome and a PhD in bioinformatics graduating with honours. He now chairs the Data Infrastructure Working Group for Project MinE, and he is the Bioinformatics lead of a joint program between the Department of Basic and Clinical Neuroscience and the Health Informatics Unit of the Institute of Psychiatry, Psychology & Neuroscience at King’s College London.
The aims of his program are threefold:

Dr Iacoangeli is not only an outstanding early career researcher, but he is also a passionate and competent supervisor and teacher. During his time with us he has supervised over 15 MSc students in statistical genetics, neuroscience, and data science, and medical trainees, one of whom won the Foundation prize. He has been a guest lecturer in many MSc courses at King’s College London and is now the lead for the Basic and Advanced Bioinformatics modules of the MSc in Genomic Medicine and the MSc in Applied Statistical Modelling & Health Informatics at King’s College London.
Professor Ammar Al-Chalabi

When I started my university studies in the early 2000, the Human Genome Project had just assembled the first “complete” human genome and the high-throughput technology revolution was moving its first steps promising that sequencing whole-genomes was going to shortly be a common part of genetic
studies. That promise was maintained, and we now have available unprecedented amounts of multi-omics data to study the basis of human diseases. I believe we are living in one of the most amazing times for research and I am particularly passionate about developing novel approaches to exploit this unique source
of information. My research focusses on the use of state-of-the-art bioinformatics, statistical and Artificial Intelligence methodologies and large multi-omics datasets to investigate the relationship between genotype, environment and disease.
In my ALS research career,